UPSC announced hall ticket for the NDA and NA (I) 2017 at its official website. will be specified on the NDA 2017 Hall Ticket. Students can download the hall ticket till April 23, 2017. Details concerned with NDA exam center, registration number, aspirant’s name, roll number, NDA exam date & timing, etc. The Commission announced hall tickets for centers outside Delhi in the first week of April while the hall tickets for centers in Delhi was announced on Monday (April 03) on upsc.gov.in. NDA Exam (1) 2017 will hold on April 23, 2017 via offline method (pen and paper based method). Aspirants will able to download their NDA hall ticket 2017 with the help of their registration ID/ roll number.

Latest Update: The NDA (I) Hall Ticket 2017 for Delhi Centers announced recently at upsc.gov.in. Earlier the commission had announced Hall Tickets for Non-Delhi centers. Links to download Admit cards can be established at the website. Detailed steps to download the Hall Ticket is listed below. Read Now

Only the aspirants who have finished their NDA Registrations 2017 correctly and also fulfill the basic NDA eligibility criteria will be allotted the NDA hall ticket. NDA 2017 hall ticket is an important document which acts as an ID proof at different stages of examination and admission procedure. Aspirants will not be allowed to sit/ enter the examination center without NDA hall ticket 2017 and a valid identity proof.

There is no other method of obtaining an Admit card. Admit card can only be downloaded online via the official website i.e. upsc.gov.in

NDA 2017 (1) Result will declare in the month of May 2017. Post result NDA will organize the SSB for the selection of the aspirants in NDA institutes.

The Exam will be organized into two sessions of 2.5 hours each at different chosen test centers. NDA Hall Ticket 2017 will be made available on the following mentioned dates: With a total of 900 marks, the sole objective of NDA Exam is to test the aspirants’ aptitude & logics as need from an officer in Indian Armed Forces.

Aspirants can get the hall ticket from the official website of the university which is available until April 23, 2017. Aspirants will not be allowed to take the examination until or unless they have an e-Hall Ticket for examination. Aspirants are advised to contact UPSC immediately in case if they establish any discrepancy in the hall ticket.

Steps to download the NDA 2017 Hall Ticket is given below:

1. Aspirants should visit the official website of UPSC at www.upsc.gov.in”

3. After clicking on the link named as “download e-Hall Ticket" instruction page will be open in front of the aspirant which they have to read very cautiously. 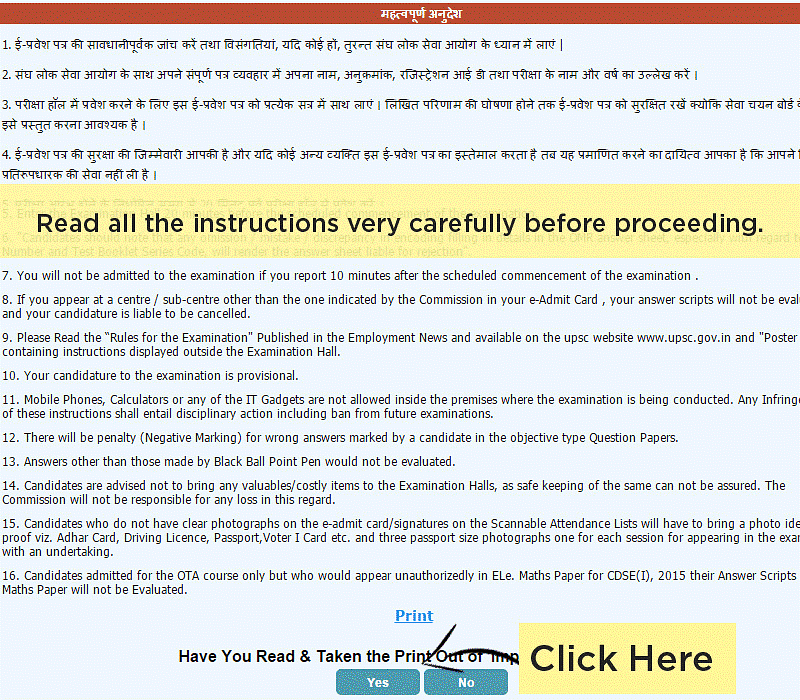 4. After that aspirant obligatory to select any one of the options from Registration ID or Roll Number to download the Hall Ticket. 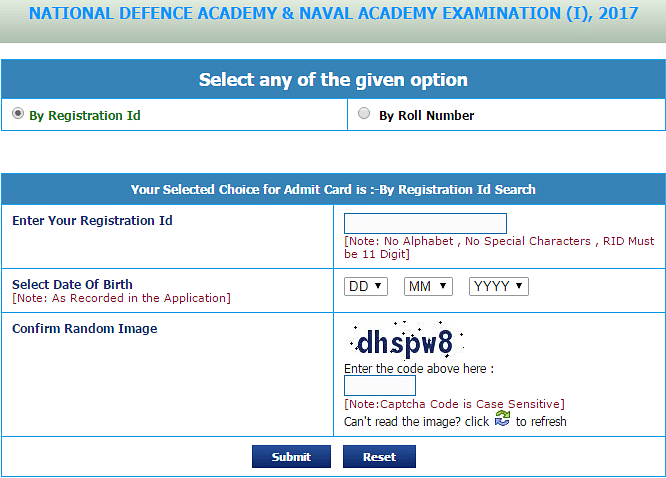 6. The hall ticket of the aspirant will be displayed on the screen.

7. Aspirants are advised to take the printout of generated UPSC NDA 2017 Admit card.

8. Aspirants can only carry a blank clipboard, black ball pen, and NDA 2017 Admit card inside the examination hall on the exam day.

Aspirants will not be allowed to appear for the NDA 2017 examination without hall ticket. Admit card contains the information for both the aspirants and examination that they obligatory to check.

Documents carry along with Hall Ticket

Aspirants should bring the hard copy of attested documents along with the UPSC NDA 2017 Hall Ticket at the examination center. In the case of any discrepancy establish in the hall ticket aspirants are not allowed to appear in the examination.

Following is the list of compulsory documents which is given below:

In case, the photograph is not printed or not visible on the hall ticket, aspirants must carry two identical photographs along with a proof of identity such as students ID card used by school or college, voter ID card, Aadhar card, driving license, passport etc. and a printout of the hall ticket to the venue of the examination.

For any communication concerned to the Hall ticket aspirant should report to the commission. With the help of following particulars aspirants can submit the complaint regarding hall ticket which is named as below:

Aspirants must bring along a valid ID card /hard copy of the attested document (in case ID card is not available) and a colored photograph of the NDA Exam Centre. It must be similar to the one uploaded during online application form along with the NDA 2017 Hall Ticket at the related examination center for the purpose of verification. Read below some important NDA exam center guidelines for NDA 2017: In case of any discrepancy, aspirant would not be to sit in the test.

Aspirants appearing for NDA 2017 should prepare well and should focus on General Science section more as it holds the larger weight of the NDA question Paper. Apart from the SSB Preparation, exercise for NDA written test is equally important and necessary as it is the preliminary stage in a quite lengthy procedure of Selection in NDA.

Aspirants are advised to access the exam center one hour before the commencement of exam. Important instructions regarding NDA Exam are mentioned below:

Got any Problem or Feedback


Get Specialized Course Material, Exam Preparation Guide on your inbox.